Tariffs raise prices. That is literally the thing they do.

The extent to which any of those second-order effects actually happen is subject to debate, and the past few years suggest that the trade-offs involved are not worth it. But if you leave aside that political debate, there’s still a basic, inescapable fact: Tariffs, by design, raise prices.

Asked Sunday on CNN’s State of the Nation Whether the administration would consider rolling back some tariffs to fight inflation, Commerce Secretary Gina Raimondo admitted that it “may make sense” to do that.

Don’t get too excited. With her previous breath, Raimondo suggested that the Trump-imposed tariffs on steel and aluminum would remain in place “because we need to protect American workers and we need to protect our steel industry; it’s a matter of national security.”

There’s that typical tariff obfuscation. What Raimondo is really saying is that the administration believes mandating higher prices for steel and aluminum—and thus higher prices on every American, and every American business, that consumes steel and aluminum—is more important than helping to bring down inflation. And that’s just days after her boss assured us that he would “take every practical step to make things more affordable for families.”

Still, Raimondo added that “there are other products, you know, household goods, bicycles, et cetera, and it may make sense. And I know the president is looking at that.”

The set of tariffs imposed by Trump and maintained by Biden—including those on steel and aluminum, along with a host of imports from China—is applied to approximately $280 billion of imports each year. Those import taxes add about $51 billion annually to Americans’ consumer costs, according to an analysis by the American Action Forum, a pro-market think tank: 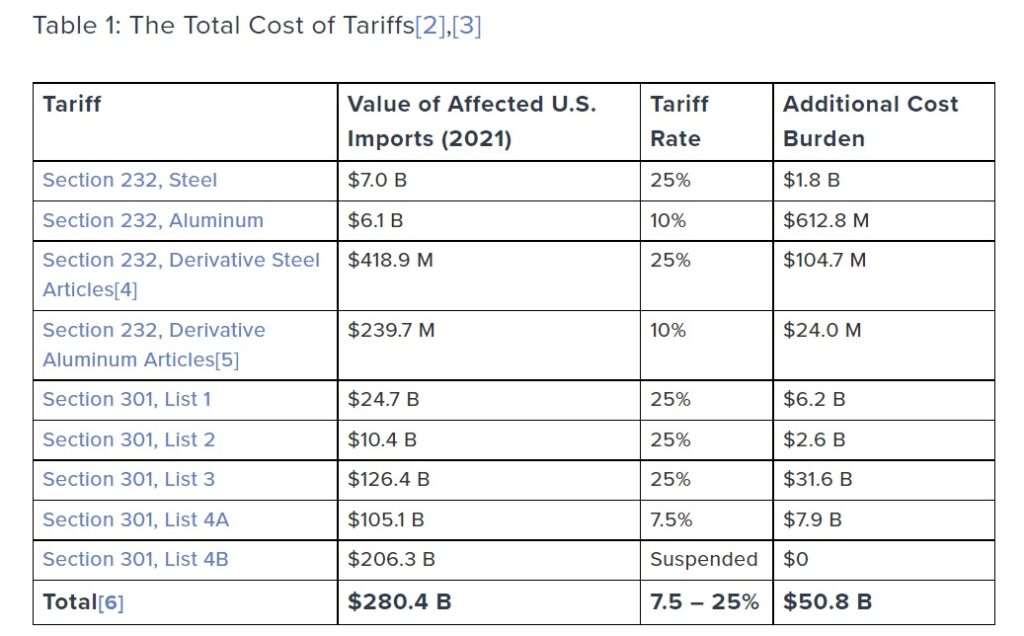 As the above chart shows, the tariffs imposed on goods imported from China under Section 301 of the Trade Act of 1974 are much costlier than the more well-publicized tariffs on steel and aluminum (and on their derivative parts). They also apply to a far wider range of consumer goods than most people probably realize, covering everything from bicycles to car parts, camping gear to children’s toys, sports equipment to clothing, and a whole lot more.

About two-thirds of all imports from China are now subject to tariffs when they enter the United States, with the average tariff being 19.3 percent. That’s six times higher than the average tariff on Chinese-made imports before Trump’s haphazard trade war began.

Thanks to all those tariffs on consumer goods, the federal government has collected record levels of tax revenue from tariffs in recent years. And American consumers have seen huge price increases.

Because, yes, tariffs raise prices. That’s what they do.

Of course, ending tariffs on Chinese imports won’t single-handedly solve the inflation problem. There’s some debate over the extent to which tariffs are contributing to inflation. Ed Gresser, a former assistant US Trade Representative who is currently the vice president and director for trade and global markets at the Progressive Policy Institute, a center-left think tank, pegs the figure at about 0.5 percent annually. Experts at the Peterson Institute for International Economics (PIIE), a trade-focused think tank, say it’s about 1 percent.

But there’s a general agreement that tariffs are having some effect, even if a marginal one, on prices. “Tariffs make imports more expensive; importers often pass these additional costs through to consumers, leading to higher prices and inflationary pressure,” PIIE concludes in its analysis of the link between tariffs and inflation.

In a speech last month, Biden promised that corralling inflation was his “top domestic priority.” If that’s true, the tariffs have to go. All of them. No more obfuscation about the alleged merits of steel and aluminum protectionism versus higher prices. Either combating inflation is truly the administration’s top priority, or it isn’t.

Raimondo’s comments on Sunday suggest it isn’t yet. But at least the White House is finally, slowly, admitting that tariffs raise prices.

That’s the thing they do.