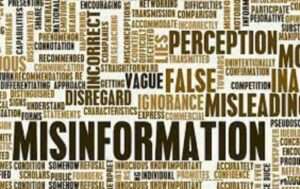 Economist Bryan Caplan is one of the world’s leading experts on political ignorance and irrationality, author of the much-cited book, The Myth of the Rational Voter. In that work, he argues that misinformed than voters are likely to be far worse ones that are merely ignorant. Caplan takes the problem of political misinformation very seriously. But, in a recent post at his new substack blog, “Bet on It,” he explains that the root of the problem is often misunderstood. The real danger is not the spread of misinformation by politicians and other unscrupulous elites, but the willingness of irrational voters to believe it:

“Nazis run Ukraine.” “Biden stole the election.” “You can cure Covid by injecting bleach.” “Lizardmen run the world.” These statements aren’t merely false; they are “misinformation” that endangers democracy and the world.

Or so I keep hearing. My question: What exactly is the mechanism of misinformation supposed to be? For the critics, the story seems to be roughly:

One obvious follow-up question is: “Can anyone do this?” If this is how the world of ideas really works, why does anyone bother with facts or logic? Or does misinformation require some unmentioned silent partner to succeed?…..

The natural pushback is to say, “You’re exaggerating. Facts and logic matter with some of the people some of the time. People have common sense, after all. If they choose, they can not only reject absurd lies, but heavily discount the words of habitual liars.”

How so? The story focuses exclusively on the flaws of speakerswithout acknowledging the flaws of the listeners. Misinformation won’t work unless the listeners are themselves naive, dogmatic, emotional, or otherwise intellectually defective. In economic jargon, the problem is that the story mistakes an information problem for a rationality problem.

The motivation for this crucial omission is fairly obvious. Blaming listeners for their epistemic vices sounds bad. It makes the accuser sound elicit, if not arrogant…..

If this seems implausible, remember the vast empirical literature on biased thinking. To take one of my favorite examples, people who have never studied economics are almost invariably protectionists. The reason can’t be “misinformation,” because people who have never studied economics spend near-zero time thinking about the subject. The story almost has to be, rather, that we’re predisposed to error. Protectionism is much more emotionally satisfying for psychologically normal humans. The study of economics is necessary to move away from this default….

I largely agree with Bryan’s point, and have made similar ones here, here, and here. Effective political misinformation works in a large part because it finds willing audiences predisposed to believe it because of their own preexisting biases, which are in turn accentuated by voters’ incentives to act as “political fans” rather than truth-seekers:

[T]he low odds that any one vote will make a difference to the outcome of an election ensuring that many consumers of political information are acting not as truth-seekers, but as “political fans” eager to endorse anything that supports their position or casts the opposing party and its supporters in a bad light. These biases affect not only ordinary voters, but also otherwise highly knowledgeable ones, and even policymakers and politicians.

This demand for misinformation is the real root of the problem. If it were lower, the supply would not be much of a danger, and at the very least would not affect many voters’ political decision-making.

In recent years, right-wingers’ susceptibility to disinformation that confirms their priors has been especially notable, as in the case of Donald Trump’s lies about how the 2020 election was supposedly “stolen” from him. But…. [s]Ocial science evidence indicates that bias in evaluation of political information is roughly equal across the political spectrum. Each side is relatively more susceptible to misinformation that confirms their priors. Examples that appeal disproportionately to the left include 9/11 “trutherism…” and claims that GMO foods should be banned or tightly restricted because they are supposedly more dangerous than “natural” ones.

One can easily extend this list of examples for both left and right. On the left, we have the popular conspiracy theory that inflation is caused by the “greed” of corporations plotting to raise prices; This belief leads many to support harmful policies in response, while ignoring ones that are actually likely to work. On the right, there is the growing popularity of “great replacement theory.”

These crackpot ideas and others like them would get little traction in an electorate that carefully and objectively assesses arguments and evidence. But they get a lot more buy-in thanks to the existence of huge numbers of “political fans” who care more about on their team and validating preexisting views.

I do have a few disagreements with Bryan’s analysis. Most notably, I think that people who are ignorant, but objective in their evaluation of evidence, are likely to be more susceptible to misinformation and other kinds of error than he lets on. I outline the basis for this difference in Chapter 3 of my book Democracy and Public Ignorance. Thus, I believe political ignorance would be a serious problem even in a world where most voters were careful to avoid bias in their assessment of the information they do know.

I also think misinformation carefully targeted to exploit voter ignorance and bias may sometimes have worse effects than the mere “spontaneous” misunderstandings of Bryan’s “unguided fools.” I am not sure to what extent we differ on this point, whose significance may well vary from case to case.

Despite these reservations, Bryan’s central insight is well-taken. The root of the problem lies far more in voters’ demand for misinformation than in the supply provided by unscrupulous elites (even though the latter deserve great blame for their activities). So long as that demand remains high, we can expect supply to keep up. We have met the misinformation enemy, and he is us.

Efforts to combat the harmful effects of misinformation must take account of this unpleasant reality. I summarize some ways in which we can do that here and here.