From Burghardt v. Yvondecided today by the California Court of Appeal, in an opinion by Justice William Dato, joined by Justices Cynthia Aaron and Truc Do:

On February 21, 2019, Burghardt performed a “neuter and scrotal ablation surgery” on Davie. He told Yvon the surgery went well, and she took Davie home that same afternoon.

Davie “whimpered” the first night home. Over the next few days, he was lethargic and “whined some.” Yvon stayed home to care for him and “even accompanied him outside to go to the bathroom” to make sure he stayed out of the harm’s way.

On March 1, Yvon noticed the fur on Davie’s back was wet. She assumed he had been licking the area. But when it was wet the next day, she pushed the thick fur aside and saw blood. She clipped away some of the wet fur, revealing a large oozing and bleeding wound. Yvon quickly took Davie to an animal hospital, where the veterinarian found this severe burn under his fur:

Yvon e-mailed this photograph to Burghardt. Within minutes, he telephoned stating, “I’m so sorry” and that he took “full responsibility.” He called it a “third degree” burn and told Yvon it was caused by a “heating pad” used during surgery.

Over the next several days, Burghardt said that he wanted to “do the right thing going forward” and again apologized to Yvon. He assured her that “a mistake like this can never happen again,” because “[w]e no longer use hot water bottles as heating elements. We have completely rid of that as a protocol…. We will never let it happen again.”

On March 15, Davie underwent surgery to remove the dead tissue. The resulting two-foot long incision is shown in the photograph below: 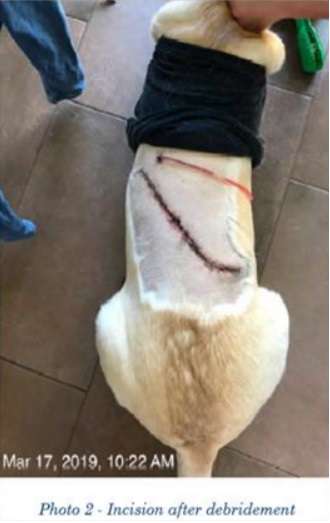 Dissatisfied with Burghardt’s delay in reimbursing her for Davie’s medical expenses, Yvon posted the following on Yelp:

“I brought my 2-year old yellow lab into Companion Pet Care on February 21st to get neutered. He went in a healthy, happy dog ​​and came out with third degree burns to at least 20% of his body…. We were devastated by what we saw: a bloody, raw wound that was the size of a man’s size 11-12 shoe across Davie’s back.

“On March 4th, I called the vet who the neutering procedure and owns this practice, Ted Burghardt …. After seeing the pictures he admitted responsibility for the burn citing ‘improper heating technique’ as the cause and apologized….

“[Burghardt] was all over the place with a treatment plan, which only added to my anxiety. While all of this was going on, my dog ​​was literally a bloody mess….

“On March 15, the new vet was able to close the wound after cutting out the dead skin and now my dog ​​has over 40 staples in his back and an incision that is over 24 inches long…. When I sent the invoice to Burghardt ( twice) his response was that it was ‘so expensive’ and he was ‘worried about [his] bank account.”

She also posted similar reviews on Facebook and other social media. San Diego television stations ran stories about the incident….

[T]he Complaint alleges Yvon “published false and defamatory statements” about Burghardt “on Yelp and Facebook.” To establish a prima facie defamation case, Burghardt filed a declaration stating it was “unlikely” that he caused the burn “given that Yvon did not first notice it until 10 days after surgery.” Although admitting that he apologized and said he would “never let it happen again,” Burghardt claimed this was merely an “effort to console” Yvon. He also described an experiment that anyone discovering “that a warmed water bottle was too hot for use” would it before being used on an animal. After reviewing Davie’s records, he noted that the dog was “good at getting into things” and would eat “plants, wood, and even the bricks outside.” From all this, Burghardt concluded, “Davie’s injuries were not sustained during surgery.”

We agree that Burghardt’s declaration creates a triable issue on whether the claimed defamatory statements are false. But to establish minimal merit on this claim, Burghardt also has to show that Yvon failed to exercise reasonable care in determining whether her statements were true…. The reasonableness of Yvon’s conduct must be determined by what she knew or should have known about the cause of Davie’s burn, not what Burghardt might have privately believed to be the cause. Her knowledge stems from what Burghardt told her. For example:

In light of these admissions by Burghardt himself, a reasonable person in Yvon’s position could believe nothing other than that Davie sustained third degree burns while under Burghardt’s care.

In urging a different conclusion, Burghardt contends that when he apologized, “it was in the context of saying he was sorry she and Davie were suffering with this, and not that he was sorry because he was admitting fault.” But even if this is what he meant, the reasonableness of Yvon’s belief cannot be based on Burghardt’s unexpressed subjective intent, but rather on how a reasonable person in Yvon’s position would have understood his express words. His statements such as, “I again fully apologize and take responsibility,” and “a mistake like this can never happen again,” can reasonably be interpreted only one way.

In a related argument, Burghardt contends, “[P]eople often say they are sorry when they hear someone was in a car accident, not because they were at fault for the accident, but because they feel badly” the person was injured. He further asserts that Yvon became “unhinged,” throwing things and “screaming obscenities” at his staff. He contends he apologized not to admit fault, but just to calm her down.

In the context of the anti-SLAPP motion [to dismiss the defamation claim], we accept all that as true. But, again, the key issue is not whether Burghardt subjectively intended to admit responsibility or fault, but rather if there is evidence showing that Yvon negligently determined that he did. There is none….