The Island Reversal Pattern is a chart pattern that involves a gap in price, consolidation and then another gap in the opposite direction (creating an island of candles as you’ll see in the below charts).

In their attempt to understand the movement of prices in different financial markets, pioneers of technical analysis techniques have found out that the price of a stock or security usually follows a specific direction after forming a specific pattern.

This discovery has become a trading discipline, which is widely used by traders today.

While there are several categories of chart patterns that traders use in technical analysis of stocks, they all follow the same logic: the support and resistance trend lines are at the bottom and top, respectively.

Patterns that fall under the reversal category often indicate that the direction of a trend is about to change. One of the most overlooked reversal patterns is the island reversal.

The island reversal pattern is a candlestick pattern in stock trading that helps traders to predict future price direction. This pattern indicates a possible reversal of a prevailing trend.

The pattern is usually formed after a quick reaction or rally and is separated from the previous move by an exhaustion gap, and from the move in the opposite direction that follows a breakaway gap.

This results in isolated data points that are separated by gaps, hence the name island pattern. The exhaustion and breakaway gaps usually occur at about the same level.

Features of the island reversal pattern

What the pattern tells traders

The island pattern can be identified easily on a chart because of its structure. It has gaps on both sides. The gaps imply that price continued in a trend for a short period, but it’s now showing signs of a reversal.

According to some technical analysts, the gaps are eventually filled as the price falls back to its previous position. However, the island suggests that the gaps will not be filled for quite a while. To identify the island pattern on a chart, you remember the following points:

The bullish island reversal pattern appears in a downtrend. Several candles follow the initial gap with a negative value, while the second gap has a positive value.

After the initial gap emerges, the stock either begins to consolidate or continues to fall. The second gap appears near the price level of the first gap.

The bearish island reversal pattern appears during an upswing. A huge positive gap forms, followed by several candles, and then a second gap with a negative value.

The stock either begins to fall or continues to rise. The second gap is close to the pricing level of the first gap.

How to trade the island reversal pattern

Now you have an idea of ​​what the island reversal pattern is all about and how to identify it on a chart, let’s explain how you should trade it. As mentioned before, the pattern signals an incoming price movement in the opposite direction of the current price movement. 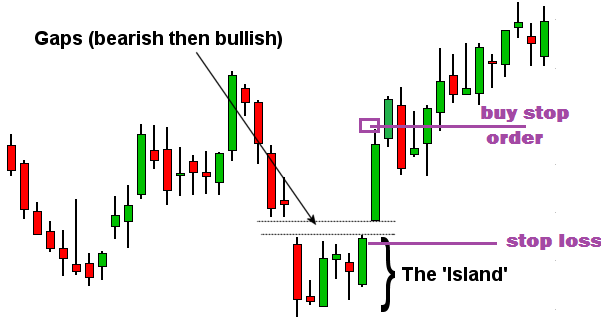 The significance of island reversal candles in trading is high. As a day trader, you aim to capitalize on new trends when a stock changes direction.

Moreover, the pattern cannot be traded in isolation, and you need to use other tools to confirm the direction because it can be unpredictable due to its rare occurrence.

The island reversal pattern indicates that the current trend is about to reverse. It has gaps on both sides that give it the appearance of a divided region. This is why it is called an island.

Having a clear idea of ​​how the bullish and bearish island reversal patterns work will help you predict where the price is going to move next accurately more.

However, it’s important to keep in mind that while the island reversal patterns can help predict the future price movement of a stock, they are still only predictions and don’t guarantee you 100% accuracy.

Therefore, you should carefully weigh the risks and practice on a demo account before trading with real money.