Anything can happen when trading a volatile market. Most traders don’t have an edge, and they don’t know how to limit risk so they get burned in these conditions. However, seasoned traders only trade when they have an edge. With the right tools and strategy, volatile conditions can create opportunities for extraordinary gains.

January 2022 has been marked by wildly shifting markets. Monday, January 24th was exceptionally volatile: the S&P plunged over 170 points in the morning, but rallied with even greater ferocity to finish higher for the day. With such huge price swings, there was definitely the opportunity if you could identify a setup with an edge. Simpler Trading’s Founder John Carter seized that opportunity and walked away with a $1.36M SPX trade.

Let’s break down John’s trade and see what it can teach us about trading high volatility.

Pulling off a Profit on a Volatile Day

John’s SPX trade was the tenth $1M+ trade of his career. He’s certainly well known in the industry for hitting 7-figure home runs in volatile symbols such as TSLA, AMZN, and GOOGL. But this SPX trade was a standout as he turned the chaotic conditions into a windfall profit with limited risk.

Because of the extreme volatility, John approached the setup with a day trader’s mindset, watching both the 1-hour and 30-minute charts. Once he saw the trend reversal, he confirmed the signal with the market internals. He bought in when TLT (bonds) started heading down and the 5-period moving average on the $TICKs went positive – both clear signs that the sell off was exhausted and the SPX was poised to a higher rip. Sure enough, he caught the turn and then kept adding to the winning trade when he saw the strength of the rebound.

In this screen capture of the Tick index, which measures real-time buying and selling pressure, John saw buying flood into the SPX and totally overwhelm the sellers. When buying volume exceeds selling volume by that kind of imbalance, the SPX has no choice but to surge higher.

Then, because of the volatility, John got out at the end of the trading day and went back to cash. As he said, “In volatile trading, a bird in the hand is worth six in the bush!” The $1.36M was money in his hand, and quite a lot of it.

Had he held his position open overnight, there was no telling if he could wake up to his gains wiped out or a devastating loss. One of the lessons for trading a volatile market is to hold positions for a shorter duration, particularly intraday.

It was an exciting few hours in our Options Gold room as John sent updates each step of the way. If you’re one of our premium members, you received a video that same night from John giving a full rundown. The next day, our Options Gold members were also able to trade alongside John, follow his subsequent setups, and ask lots of questions.

We’ve captured the highlights and insights from John’s trading decisions on January 24th. Here are several ways to improve your trading skills and potentially profit from market volatility in the future.

Not everyone knows how to trade during high volatility, and not everyone trades with an edge. And without that edge, a trader can never successfully manage the market. Instead, focus on managing yourself and the trades you make. Here are just a few risk management practices to consider–practices that John follows in his own trades.

Stick to Your Plan and Your Risk Profile

Everyone on the team at Simpler Trading has a trading plan – it’s a precedent that John started in the early years because if you fail to plan in the markets, you plan to fail. You can find updated trading plans in the trader profilesincluding John’s.

Your trading plan will define how you trade–your strategies, set ups, and so much more. The most important input to your trading plan? Your risk profile. If you do your planning properly, you’ll know in advance if you have the stomach to trade high volatility, and the parameters of your plan will keep you out when the market is wild.

If you do feel comfortable with the risk of volatile markets, it’s always good to think about your position sizing. Taking smaller positions can allow you to profit from market volatility while managing the risk to your overall account.

In addition, having well-defined time frames around your trades can help set boundaries on your positions… and your risk. John’s SPX trade was carefully sized according to his risk tolerance. In fact, his initial buy-in was smaller, and he only added to his position once he felt more confident in the reversal move.

Don’t Stay in a Trade Too Long

The secret to trading a volatile market is not only knowing when to get in, but also knowing when to get out. John purposely approached his SPX setup as a day trade. He went to cash that night, even though there was a possibility that the market would gap up in the morning. As he said, “Why risk it?”

Look for the Trend Reversal – a Key Strategy in Volatility

When you’re trading reversals, your goal is to identify the bottom of a downward trend and look to ride the wave back up. You may be inclined to short the stock, but chasing a stock, or market, as it spirals down can be dangerous. Instead, your objective should be to spot the trend reversal signal.

How do you do this? Well, first, it’s always helpful when trading volatility to change your charts to shorter time frames. Most likely, if the markets are really rough and you’re closely managing your risk, you’ll be in for the day trade and nothing more.

Then, you’ll want to watch your technical indicators for signs of bottoming out. 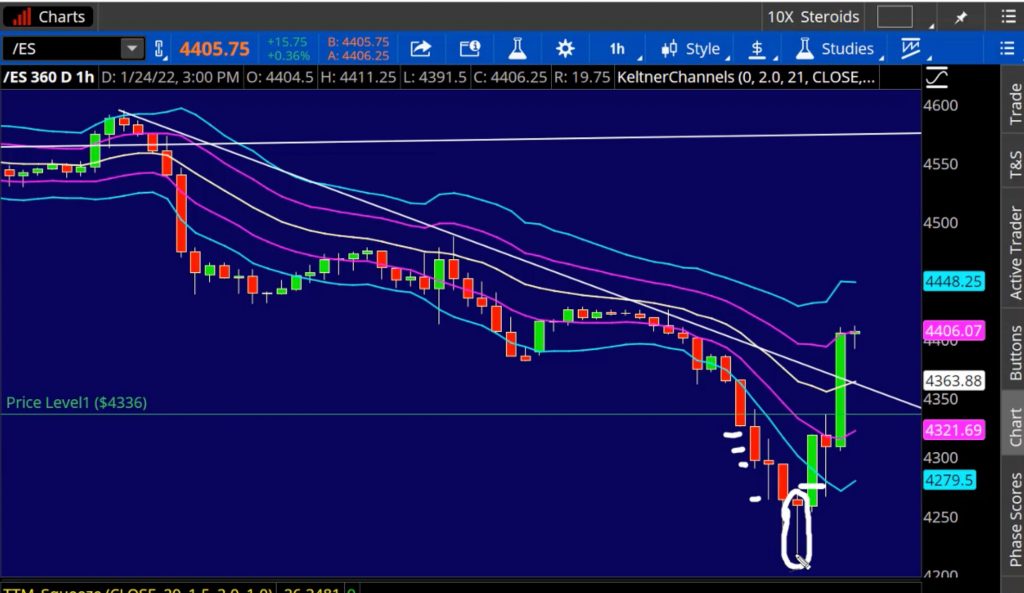 In John’s SPX trade, he was watching the candlesticks. He knew that a reversal trading strategy would start with a bottoming candle like the one shown in the chart. There was no benefit to buying until he could see a high above the low bar on a 30-minute or hourly chart. Once he saw it, he had a strong indication that the trend reversal was imminent. But he needed to cross-check with other market data.

Technical indicators are key to trading – especially day trading. They provide critical entry and exit signals and help with quick decision making. However, when trading in volatile markets, it’s also a good idea to look at market internals to find specific support for what is happening.

At the most basic level, market internals show how money is moving through the market. So if you think you have a trend with your technical indicator, it helps to confirm that the flow of money validates that trend.

Which market internals should you follow? There are obviously a lot to choose from. John looked at these:

There were two internals that especially sealed the deal for John.

Moving Averages with the TICKs

TICKs show the net buying and selling of the market, so high TICKs mean buying is stronger than selling, low ticks mean selling is stronger than buying. The day started off with the TICKs and the 5-period moving average at extreme selling levels. But then John saw the TICKs pop up and the 5-period moving average move higher, crossing into positive territory–clues that perhaps there would be a turnaround.

So when did he know to buy? When the moving average of the TICKs went positive.

He bought when it started to climb, and continued to buy in on the way back up. The upward momentum had a few hiccups, but he could see from following the TICKs that the trend wasn’t completely falling apart, so he rode it out.

If you think the market will go up, you’ve got to see bonds go down. Initially John watched the market bounce, but he also saw that bonds stayed firm. His response to that? “No way.”

But then he saw the market pop up again and bonds head down. His response that time? “I’ll buy that all day long.” And he did. 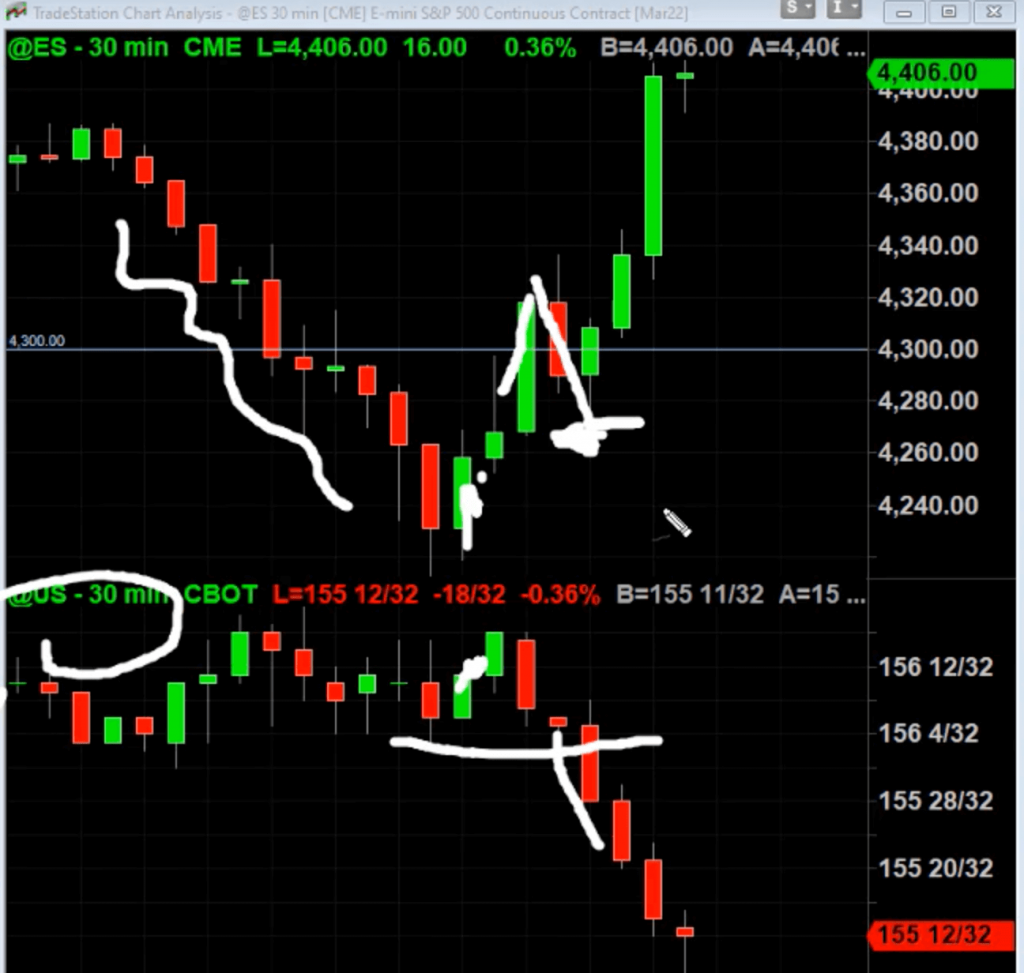 Keep Your Head – Avoid Emotional Trades at All Costs

One of the biggest mistakes in trading volatile markets is panic buying, or selling. John always says not to let the last trade influence the next. With market volatility, there’s a chance your last trade didn’t go so well… and that might influence how you react in the subsequent trade. But to be successful, you can’t trade with fear, greed, or especially, revenge.

When markets decline as much as they did prior to, and on, January 24th, it’s clear there is accelerated selling, a sign of panic. If you’re entering that environment, you’ll have the advantage if you take emotion out of your trading decision making.

How do you do that?

Well, no surprise, experience is an excellent teacher. Seasoned traders know how to trade in volatile markets because they’ve seen them before, taken a few (hopefully low-risk) losses, and learned the hard way.

Your trading plan is also a good tool. Setting boundaries for your trading helps remove the opportunity for emotional trading.

In addition, if you’re serious about being a successful trader, you’ll want to be a continual student of the craft; that includes evaluating your own trading practices, learning what triggers you and how to stay more disciplined.

And it definitely helps to follow a trading mentor, or two.

At Simpler Trading we think one of the best ways to improve your trading is to trade alongside veteran traders in live trading rooms. You can get questions answered in real time and find setups and strategies that work for you. And our team loves to provide tips and tricks for more disciplinaryd trade decision making–even in volatile markets.

Are you interested in taking your trading to the next level? We invite you to join us in the same Options Gold room that John trades in each week. We hope to see you there! 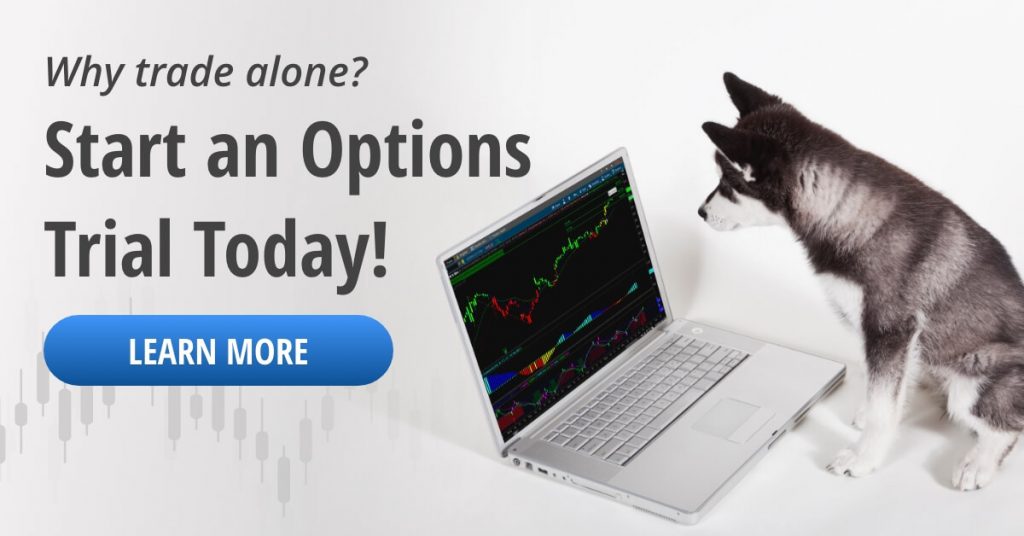