Meme stocks are back and yet again.

After months of commentators creating narratives that the retail phenomenon experienced in 2020 and 2021 was simply aberration, often citing exchange volume data as proof, have yet again been dashed as this small group of stocks like GameStop (GME), and AMC Entertainment (AMC) and a sub-group of related meme stocks continue to randomly pump on questionable catalysts.

Chart of the Week

This week we look at US personal savings as a percentage of disposable income. Looks like a low float momentum stock gone bust:

We finally saw some weakness in stocks this week after several consecutive up days.

This is quite typical price action, as indices like the S&P 500 are mean-reverting their nature, they don’t often remain at the edges of their short term range, as defined here by the Keltner Channels. It’s not oil or a microcap stock, so you can’t expect it to trade as such, with exponential trends and blow-off tops. Gains in stock indexes are more linear.

As of now, based on the limited information we have from this downswing, this looks like an orderly pullback within the context of a potentially newly formed trend. What will be most telling here is the nature of the pullback. If we get a relatively violent pullback, roughly defined as taking back roughly half of the gains established by the upswing, that bodes pretty negatively for the soundness of the trend.

In a newly formed trend, you’re looking for a strong initial few upswings with shallow and timid pullbacks, with the pullbacks getting more violent and the upswings getting more hesitant as the trend goes on until ultimately the pattern fails. If the first leg of the pullback is ugly, that’s not a trend you typically want to be the farm on. We do have to keep in mind that we’re dealing with an index here, which are more mean-reverting than individual stocks as it relies on the performance of hundreds of stocks. Indices are always more choppy than their individual stock counterparts.

In oil news, US President Biden released 180 million barrels from the US’ Strategic Petroleum Reserve (SPR), a new record, at a rate of a million barrels/day over the next 180 days. Biden said that this is to put some ease on oil prices while domestic oil & gas producers ramp up production.

The price of front-month oil futures are testing the $100 level right now, after reaching a high of $130.50 earlier this month.

The SPR is basically a savings account full of physical oil that the US Department of Energy stores in case of emergency. Biden is releasing as much as he can as a result of the energy shortage.

Javier Goya on Twitter drew a projection of what the SPR would look like at the end of the release period: 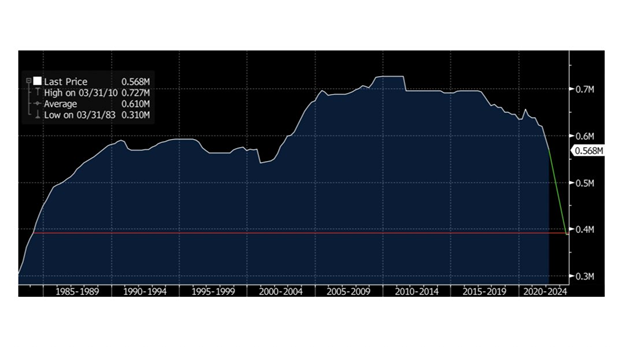 The spread between the 10-year and 2-year US treasury notes is one of the most reliable indicators of a recession. Typically, when the yield curve inverts (aka, you get more yield on short-term notes than long-term), the probability of a recession increases increases.

Hence, when this relationship breaks down, especially in the most important debt products in the world: US Treasury notes, something is wrong.

While there are many different US Treasury yield curves (different spreads between different maturities), the spread between the 10-year and 2-year is looked at as of the most importance.

And the yield curve inverted this week: 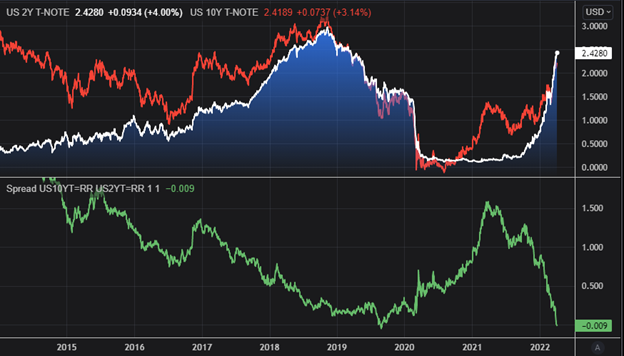 Meme Stocks Are Back… For Now?

The “blue chip” meme stocks like GameStop (GME) and AMC Entertainment (AMC) are on the move this week. Amidst the new rally, GME capitalized on the rally even further by announcing a stock split. Tesla is also doing another stock split and issuing share dividends.

We know that a stock split does nothing to change the fundamental value of a company, but meme stock traders love stock splits. They view them as bullish catalysts and buy.

While many commentators are bemoaning retail reactions to stock splits, I think they’re missing the bigger picture which is a real driver of flows.

The average Robinhood account has $3500, versus their competitors with significantly larger averages exceeding $100,000.

Buying options on a $100+ stock is very expensive for such small accounts, and a loss would make up too large a portion of their account. Splitting the stock means cheaper options. Cheap OTM options means meme stock speculators can buy them without being too prohibitive to their account size.

And we know that retail OTM call buying has been a huge factor in many of the questionable rallies in growth and meme stocks throughout 2020 and 2021, as many have caught up on due to the growth in popularity of analyzing the hedging activity of options dealers and “gamma squeezes.”

So, purely from the standpoint of wanting to increase their stock price in the short-term, it makes complete sense for GameStop management to do.

Here’s charts of GameStop and AMC:

In Other News Last Week

Another soft week in the build-up to earnings season. So far, the early-reporting companies have mostly reported surprises. Next week (April 11) will be start of Q1 2021 earnings season and we should get a much better reading of how the economy is faring amidst rising inflation, energy costs, and geopolitical turmoil.

FYI, the survey portion of the PMI report is invaluable. Direct quotes from manufacturing executives. You can find the report here.

What else happened last week?