It was a very eventful week. We can’t possibly get to everything and still keep things brief. Keep in mind the Stalin quote – “there are decades where nothing happens; and there are weeks where contracts happen.” when trading these markets.

The Russia/Ukraine war is still going strong with the Russian troops just nine miles from Kyiv, according to recent reports. As long as this remains hot, Russia and NATO war allies like the US and Europe are likely to remain in financial warfare, which is very bearish for global markets. So far, the sanctions and embargoes have led to massive rises in commodities prices in which Russia and its allies are major players.

War and volatility typically go hand and hand, as it is now with the VIX hanging around the 30 level for far longer than usual. It’s quite abnormal for the VIX not to mean revert shortly after a spike above the 30 level, which just goes to show the impact this war is having on markets. 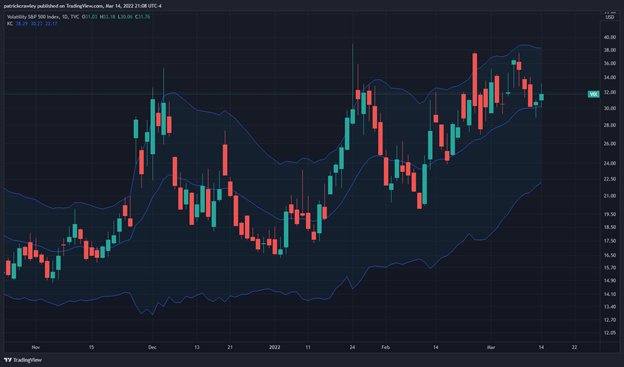 However, despite seemingly doomsday sentiment from those on social media, peak-COVID-level bearish news flow, and record outflows from several markets equities, the S&P 500 refuses to budge and break its crucial support level of 4115. 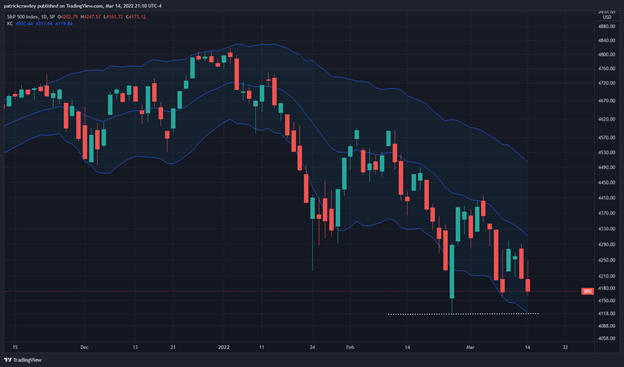 There’s probably more information within this price chart than any other measure of market sentiment out there right now. The S&P simply refuses to go down significantly on what should be very bad news.

Inflation is running hotter than ever and likely just got much worse with this war, Russia has thrown veiled threats at nuclear war to the US and Europe, and nobody knows what level of this conflict will escalate, or if NATO will physically get involved.

If you open financial Twitter, many of the more influential users will have you believe that we’re on the brink of another Great Depression driven by the end of US dollar hegemony, spearheaded by Russia and China teaming up against the US. I’m not even making a judgment on this view, but its prevalence just demonstrates how poor sentiment is.

This all comes at a time of an already-insecure environment with regards to inflation, interest rates and global growth.

The fact that the S&P hasn’t cracked yet tells us so much. This isn’t a call to buy, but it’s certainly something to note. Alex from Macro Ops called this market a “beach ball,” the type of market that “looks like a submerged beach ball waiting to pop higher.” I couldn’t describe it better myself.

Crude oil, which has quickly become the most strategically important asset in the world in the wake of this war, backed off a bit later in the week. The setup on the daily chart is beginning to look a lot like a blow-off top. 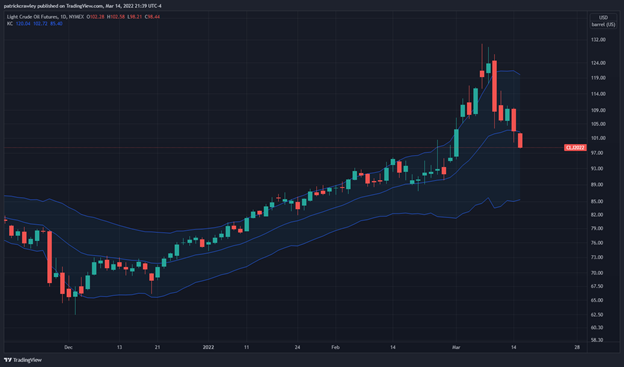 A lot. We’ll go into some of the bigger stories, but here’s a TL;DR for you:

Russia and Ukraine Are Having Peace Talks

As stated earlier, reports indicate that Russian troops are nine miles from Kyiv. With this war in its third week, Russia and Ukraine finally started opening up the dialogue to have peace talks this week.

Talks haven’t led to any breakthroughs as of yet, but an aid to Ukrainian President Zelensky said that the talks are on the subject of “peace, cease fire, withdrawal of troops, and security guarantees.”

Just the presence of peace talks is a positive development, however.

Many commentators have noted that the United States’ inflation and shortage misfortunes puts China in a more strategic position globally. While that might be true on the geopolitical level, it’s not showing up in China’s financial markets. 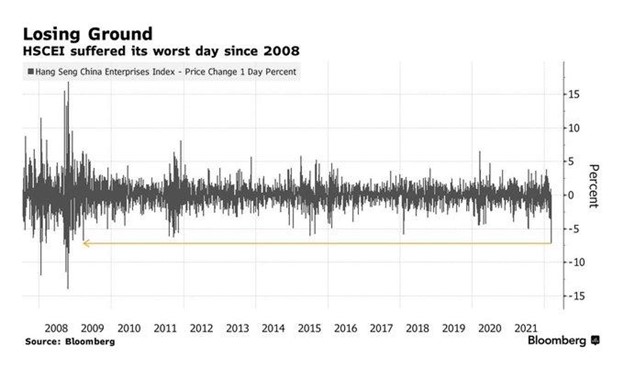 Also, who remembers Evergrande? Chances are, you don’t pay close attention to the Chinese real estate market unless an overlevered company having credit problems like Evergrande is in the news. 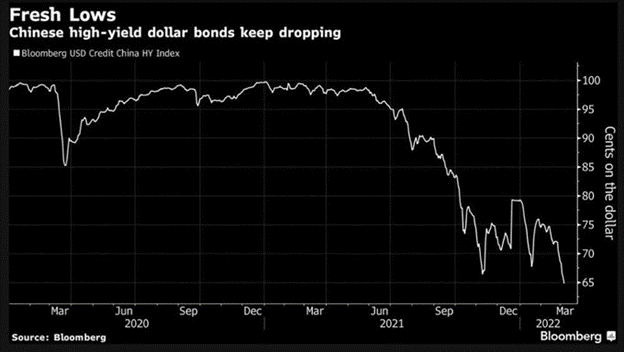 Drama In The Nickel Market

Amid the chaos in Ukraine, this story in the nickel market is flying under the radar. The price of nickel, which is a metal used to make stainless steel and batteries, multiplied 3.5 times on Tuesday, March 8 2022.

A Chinese billionaire called Xiang Guangda had a massive short position in nickel and as a result of the entire commodities market rockeding up in price, he got a margin call from his brokers. JP Morgan, apparently, is chief among those brokers.

Typically, a broker would demand an immediate deposit of more capital to support your position, or sell you out of your position and take a loss on the margin loan. However, that’s what happened here.

This led to the London Metal Exchange, where the primary nickel futures contract is traded, to halt the nickel market and eventually reverse all trades that occurred on March 8, 2022 in order to save brokers like JP Morgan from the massive losses they’d get if they weren’t paid on their margin call.

Cliff Asness, the famous founder of AQR Capital Management, is accusing the LME of “reversing trades to save your favored cronies and robbing your non-crony customers.”

One of the primary economic gripes of US and European consumers so far in this crisis has been the significant increase in energy prices. Specifically, gas and heating oil prices in the US, and natural gas prices in Europe.

As a result, the University of Michigan’s consumer sentiment survey hit its lowest point since 2011 with a reading of 58.7 for the first few weeks of March 2022. Last month it was 62.8.

The Consumer Price Index data for February came in last week, with a print of 7.9% YoY growth in inflation. That seems pretty inline with the readings we’ve been seeing the last several months. But it doesn’t take into account much of the invasion of Ukraine by Russia, which began on February 24, 2022, and didn’t really heat up until the second week of the war.

Since February, we’ve seen some explosive price action in vital commodities which are input costs to key consumer goods we buy weekly like gasoline and food.

With inflation running hot, stagflation has become a key talking point among market commentators. Stagflation is when inflation runs hot but economic growth declines and worsens increases. It’s a perfect storm for a lousy economy.

We’ll really start to get an idea of ​​how companies fared partly through the (likely) increased inflation of the Ukraine situation when Q2 earnings season starts April 15.

As of now, earnings reports are pretty thin with far fewer companies reporting.

We have a Fed meeting on Wednesday, and its very likely that the Fed will hike interest rates by 0.25%. This is a landmark meeting because the Fed has been extremely loose and accommodative since the pandemic started, promising “unlimited” stimulus at one point to save the economy from COVID lockdowns.

While the market expects a rate hike, the market’s ultimate reaction when/if it happens will be very telling. It will mark an end, or perhaps a reduction of the “free money era” that drove growth stocks to untold highs between 2020 and 2022.

That’s the primary thing to look out for this week, but of course there’s some other data points of note too: