It was another eventful week in markets with the Fed dipping their toes into hawkish water for the first time since 2018, Russia and Ukraine still failing to reach a peace deal or compromise, and insane price action in the Chinese stock market.

Before we go over what happened this week and what will happen next week, let’s quickly review the charts of the week.

Charts of the Week

Chinese stocks had a face-ripping rally this week, especially in Chinese tech. The Chinese Communist Party promised to stabilize markets and “actively introduce policies that benefit markets,” according to Bloomberg.

This comes after nearly endless crackdowns on Chinese tech companies by the CCP and Chinese stocks are 75% off their highs.

Here’s how Alibaba (BABA) responded to the announcement:

US housing has an inventory problem. A really bad one.

We’ve all likely seen lines out to the street to view open houses either in person on social media. Lennar, one of the nation’s largest homebuilders called the housing supply chain “all but broken” on their earnings call this week, just in time for Redfin to deliver us this gem… 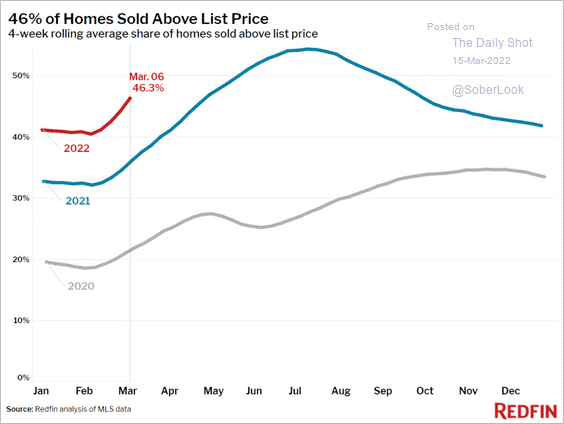 Finally, we have the NASDAQ 100’s response to the Fed turning hawkish and hiking rates 25 basis points: 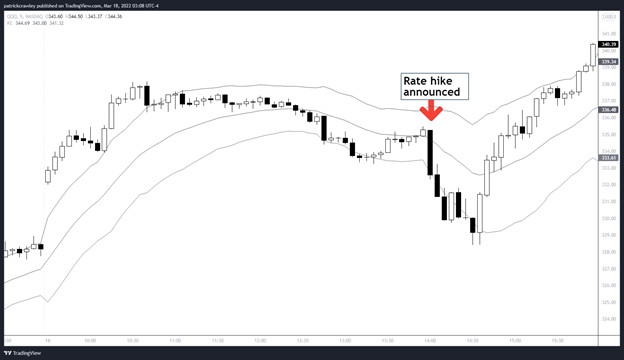 What Happened This Week?

The most consequential event of this week was Wednesday’s FOMC meeting, in which the Fed hiked rates and shifted to a more hawkish tune. More on that later.

The Fed flipped hawkish. They hiked rates 25 basis points, but they say there’s six more rate hikes coming this year, with the possibility of 50 bp hikes.

Powell seems to be shifting his focus to inflation as the primary mandate, with interesting comments like “we’ve had price stability for a long time and maybe come to have taken it for granted. Now we see the pain. I’m old enough to remember what high inflation is like.”

It might be too little too late, though, as the 2/10 treasury spread is flattened on the news, and is dangerously close to inverting, which is one of the most reliable indicators of a recession coming in the next 12 months.

Interestingly, the stock market, particularly long duration growth stocks rallied hard on the announcement of the rate hike. ARKK is up 20% on the week. It could be easily explained by the classic phenomenon of investors degrossing into uncertainty, then buying back in once there is a certainty.

However, I did come across an interesting thread that explains the price action through the mechanisms of the option market from Sergei Perfilievcheck it out here.

In a nutshell, Perfiliev explains that when the implied volatility of the SPX puts investors bought to hedge got blown out after the announcement, dealers who sold said puts had to unwind their delta hedges by buying the index.

Optimism for a peace deal between Russia and Ukraine is waning, as diplomats from the two nations have repeatedly gone nowhere. An advisor to Ukrainian President Zelensky said “the positions of the parties are different. For us, fundamental issues are inviolable.”

Earlier this week Ukrainian President Zelensky addressed the US Congress and asked for a no-fly zone above Ukraine. In an appearance on NBC News the same day, he told Lester Holt that World War II “may have already started.”

US President Biden announced an $800 million defense fund for Ukraine, mainly for anti-aircraft systems, on the same day.

The yield curve is flattening, and a full inversion is one of the best indicators of a recession coming within the next year.

Here’s a chart courtesy of The Daily Shot: 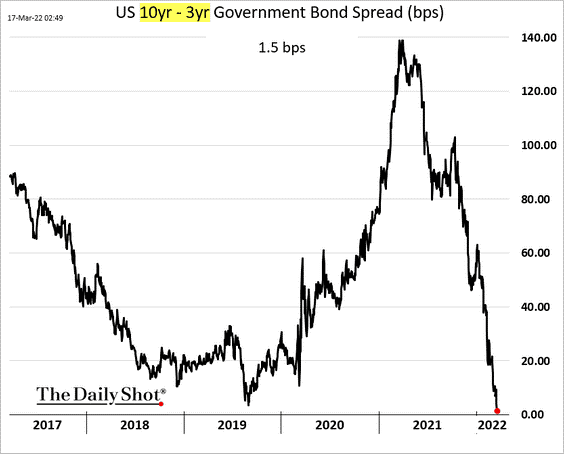 The bond market is essentially skeptical of the Fed’s current plan of hiking rates amid high inflation and declining growth–stagflation. They’re calling the Fed’s bluff, they think rates will stay elevated in the short-term only to come down in a few years as a result of the Fed turning the printers back on.

GameStop (GME) is nearing 52-week lows on a bearish earnings report in which they were expected to earn $0.84 but actually lost $1.86 during what is seasonally their strongest quarter, the holiday season, Q4.

The stock dropped in the neighborhood of 8% on the report, after initially making a new 52-week low on the initial reaction after hours.

Here are the companies reporting next week:

Last week we got favorable Housing Starts data which surprised to the upside, a 6.8% MoM growth, however, Building Permits, which is a leading indicator for housing to be built in the future, declined 1.9% MoM.

This likely reflects the massive supply chain issues that the real estate development industry is experiencing now, as said earlier, Lennar said that the housing supply chain is “all but broken” in their most recent earnings call. 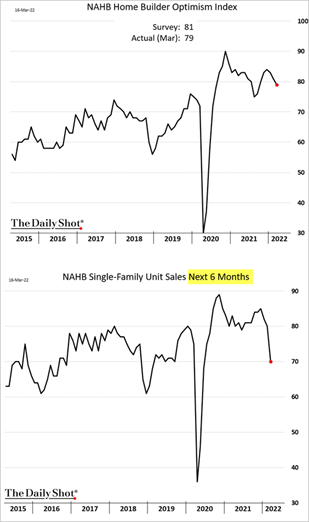 Of course, as we’ve mentioned, the Fed raised interest rates 0.25% and announced the start of quantitative tightening in the coming months.

Here’s what we have coming down the pipeline in terms of economic data next week: