A Quick Primer on What is Happening

Russia, and Ukraine are embroiled in a territorial conflict right now. It’s actually been heating up for a while, with Russian troops being stationed along the Ukrainian border since March 2021.

Early on Thursday 24, 2022, Russia invaded Ukraine in full-force, with explosions occurring in Kyiv, Ukraine’s biggest city. Our hearts go out to anyone that is put in danger by this ugly conflict.

Russian President Vladimir Putin announced on Wednesday morning of Russia’s intention to disarm Ukraine and used some cryptic language that suggested Russia is also targeting regime change in the country.

Explosions were heard in several Ukrainian regions, including the capital city Kyiv. In response, Ukrainian President Zelensky has imposed martial law in the country, asked allied nations for support, and even invited Ukrainian citizens to take up arms to assist in the conflict.

The United States and its NATO allies in the European Union responded with sanctions, threats, and more to follow. It’s tough to know what the response from NATO will be at the moment.

The situation is changing by the minute so it’s possible that by the time you read this, this information is outdated so check news wires for more up to date news.

So how did this happen, and how did we arrive here?

The primary contention is that Ukraine wants to join NATO, and Russia doesn’t want that to happen. Russia perceives the expansion of NATO influence near the Russian border as a threat to their global influence and power and has been making threats for years now.

Even more threatening to Russia is that Ukraine is an ally to NATO, receiving weapons, training, and other benefits.

If you’re unfamiliar, NATO, or the North American Treaty Organization is a military alliance made up of 30 countries and led by the United States. Essentially, the member countries agree to defend each other. Strength in numbers.

The United States leads NATO and naturally they benefit from gaining an ally in Eastern Europe strategically located near Russia, one of the world’s superpowers that the US would like to keep in check. Even so, the United States hasn’t guaranteed Ukraine that they can join NATO, however it seems that they view them as a favorable ally.

Russia, who is not a member of NATO, views the alliance’s expansion into Eastern Europe as a threat because it makes them far more vulnerable to an attack from Europe to the west. Look here at a map of NATO members (blue) and see:

Oil briefly breached $100 only to pullback: 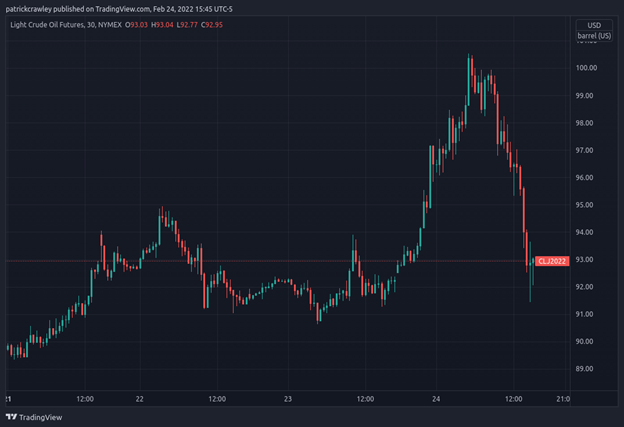 Russian stocks are down over 30% this week: 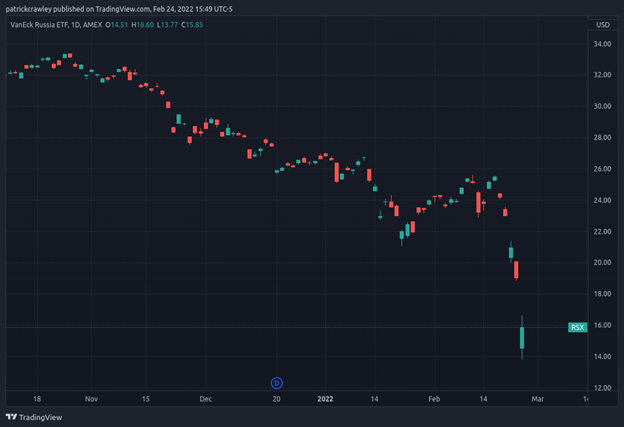 The Russian Ruble is at a record low: 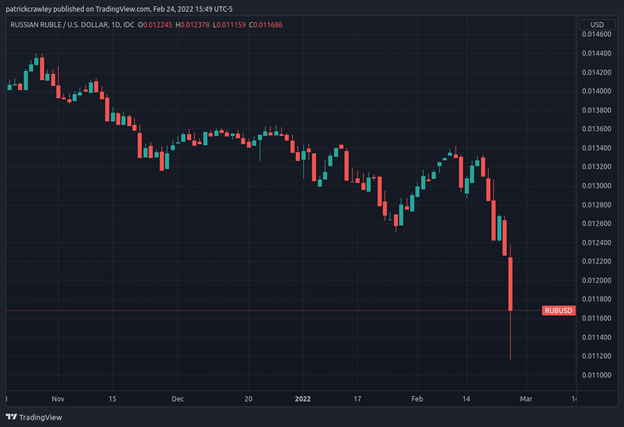 Russia’s sovereign debt is also taking a bloodbath. Part of the price action is mere market reaction to the events, while others are reactions to potential future forced liquidations due to several nations sanctioning the sale of Russian sovereign debt. UBS even cut the value of many wealth management clients’ Russian bonds to zero, triggering some margin calls.

Precious metals are surging, as they’re expected to do during military conflicts. Keep in mind that Russia is the world’s top Palladium producer.: 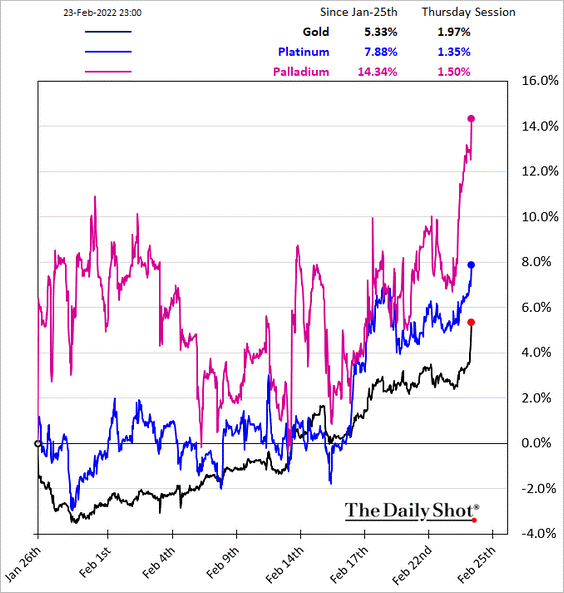 Why Is This Happening?

Some would say Russia is acting out of desperation, as NATO’s influence has been growing towards its western border and now they’re showing up at the front door with Ukraine potentially joining. Russia has tried for decades to halt the expansion of NATO in Europe to avail, and it appears they’re choosing to make their stand here in Ukraine.

A stronger NATO to Russia’s west keeps Russia in check and in turn reduces their global influence. Back in 2014, Russia was able to successfully annex Crimea, a formerly-Ukraine-controlled peninsula with major ports on the Black Sea. Such ventures are far less likely to be successful when Russia’s neighbor has the might of NATO and the US behind them.

Earlier on in this conflict, it looked like Russia might have been trying to defend their position as a global nuclear power. After all, the country has a relatively poor economy and demographics, with their military might, nuclear arsenal, and rich natural resources giving them their power in the world. Compared to a country like the United States, which has both the world’s largest economy and military and is capable of wielding influence outside of raw power.

However, it’s beginning to look like Russia might have larger plans, or at least wants to scare anyone off from poking the bear. National Security reporter for the Washington Post Paul Sonne tweeted late Thursday:

“Zelensky keeps saying Ukraine wants to talk with Russia to end this, has already floated neutrality for Ukraine, ruling out NATO membership. It is clear Putin has entirely other plans.” – source

Tensions between the US and Russia have also been pretty hot for the last few years, with each country regularly accusing the other of cyber attacks, propaganda campaigns, election meddling, and a host of other misdeeds.

Speaking from the American perspective, there’s no doubt that Russia regularly runs influence operations on the American public to the dismay of the general populace and military alike.

What Are The Financial Consequences?

Russia is one of Europe’s largest suppliers of natural gas, which is the primary method Europeans use to heat their homes.

With most European nations being members of NATO, it’s entirely possible to see Russia reduce or cut off this supply of gas to put pressure on NATO to give Russia what it wants. Furthermore, many natural gas pipelines that transport gas from Russia to Europe run through Ukraine, raising questions about the availability of that gas.

There’s potential that Russia might restrict the supply of this gas as a way to respond to sanctions. Multiple European nations like the UK have already levied sanctions on Russia to dissuade them from aggressive actions.

Europe is already having one of its toughest winters in decades, from a perspective of energy capacity. They’re paying out the nose for natural gas as things stand, and this conflict could make things far worse, especially if the early price action responses to the conflict are any hint.

Take a look at the price action of EU natural gas throughout the 2021 winter. Prices rose 62% today (Thursday): 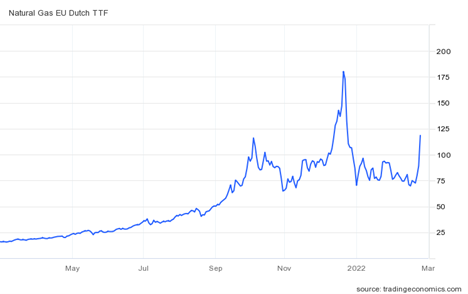 To put things in perspective, below is a chart of the daily gas flows from Russia to Europe from the start of 2020 to 2022. This number has been steadily declining over the last several months, which has already inflicted pain on Europeans and their heating bills . 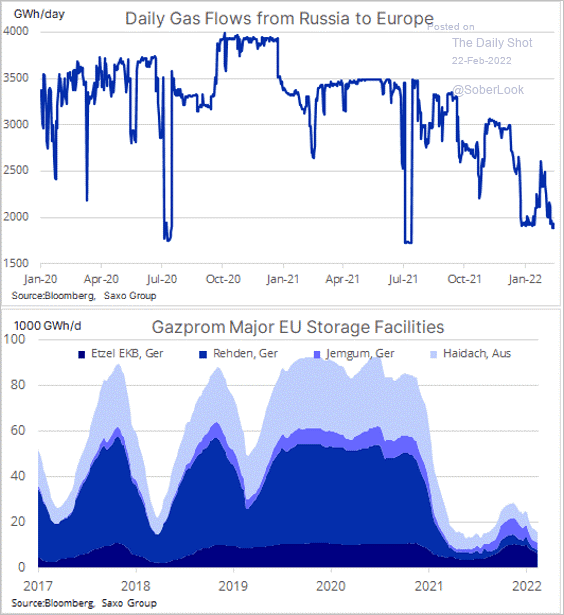 Both the US and EU are levying sanctions on Russia targeting banks and Russian billionaires.

Today US President Biden announced an export block on technology, which prevents Russia from importing vital defense technology to build up their military. The block includes goods like semiconductors, software, telecommunications equipment, and the like. US officials estimate that nearly half of Russia’s technology imports will be cut off as a result of these sanctions from the US and its allies.

Much of the European sanctions are focused on choking Russia out of the EU financial system by cutting off their access to European financial markets, banks, etc. The intention seems to be to put a chokehold on the Russian economy to create leverage.

Many within the European Union, including the UK, Ireland and Poland have gone as far as suggesting cutting Russia out of the SWIFT system, which is the global payment system that runs banking. Essentially, to do bank transfers, you need access to SWIFT. Doing this would make it much harder for money to transport in and out of Russia. They’d be shut out of the global banking system.

Even very early on in this conflict, we’re seeing significant escalations in the use of force. There are videos floating around on social media of seemingly non-violent anti-war protesters in Moscow being beaten and arrested by police.

See this video from BNO News, for example:

This is an event that’s been brewing for a while, with many expecting it to go hot at some point. It’s tragic to see a war break out and this one seems to be destabilizing the world quite a bit. It’s hard to see what comes next, but it does feel like we’re entering a renewed Cold War with Russia.

As usual, at the level of peak bearishness, markets do exactly the opposite of general expectations, harming the most people in the process. We just have to decide if there’s any sense in the market’s bullishness in the light of a highly volatile situation.