The House select committee investigating January 6 put on a good show in its first public performance, teasing the major plot points Americans can expect to hear over the coming weeks and offering juicy glimpses of the evidence it has been gathering.

Most congressional committee hearings seem set up to give each member a few minutes of public grandstanding and that’s about it. They’re polemical. They tell rather than show. But last night’s (widely-televised and streamed) hearing of the House select committee on January 6 was different.

In lengthy opening remarks, Wyoming Republican Rep. Liz Cheney displayed a TV prosecutor’s command of narrative, weaving together video footage and commentary from January 6, 2021, with post-hoc video testimony and tidbits from key Trump administration players and GOP lawmakers, plus statements from people who partook in storming the Capitol. The result was a cohesive and disturbing view of the lead-up to the day’s events and their aftermath.

Cheney’s presentation “is specific and uses snippets of evidence very effectively to make the case,” recommended University of California, Irvine, law and political science professor Rick Hasen. “It is a strong opening argument short on invective. Showing not telling.” 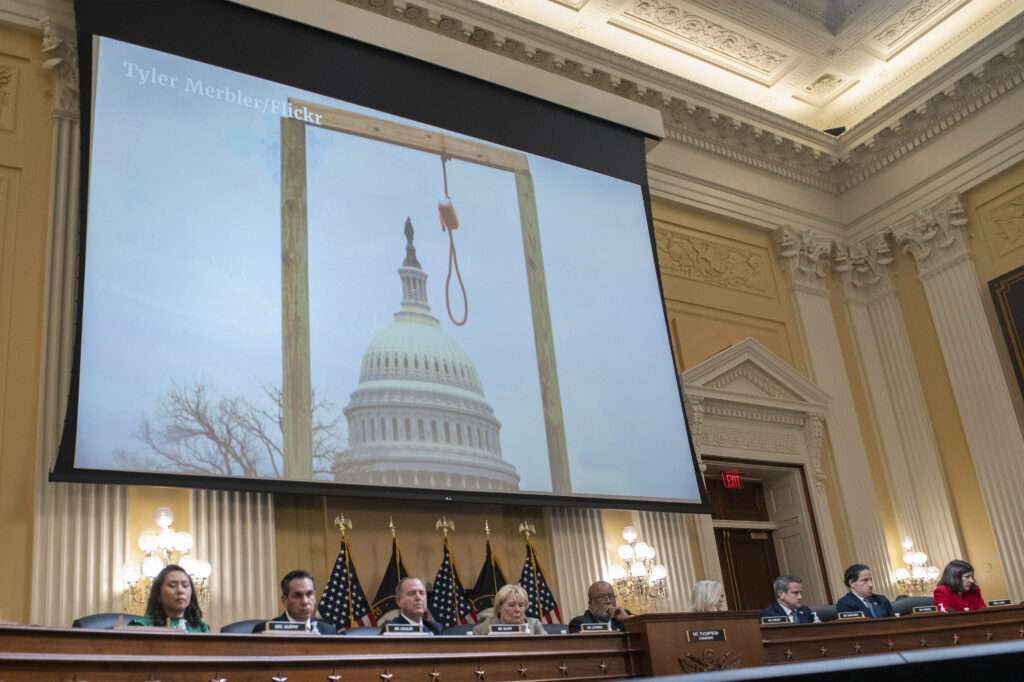 Many photos and videos from January 6 depicting people who were plausibly clueless—wandering the Capitol rotunda, gawking, taking selfies—or engaged in only the mildest of mischief. But footage aired during the hearing committee vividly presented the day’s much more sinister side.

The footage aired last night showed people rushing Capitol Police officers and fighting them, tearing down barricades, and throwing tear gas. We saw people vividly engaging in what appeared to be knowing, furious, and violent actions, as Capitol Police talked in terrified voices about being vastly overpowered and impotent.

Amid this footage we saw and heard from former President Donald Trump, doing things like riling up the pre-riot crowd with election fraud lies and demands that former Vice President Mike Pence refuse to certify the Electoral College results.

And as the MAGA mob took the US Capitol building by storm, Trump gave no order to deploy the National Guard.

Cheney: Trump “did not call his Sec. of Defense… He gave no order to deploy National Guard that day and made no effort to deploy law enforcement each assets… Vice President Pence did of those things.”

Clips of some of Trump’s closest allies showed they weren’t on board with all this.

“I made it clear I did not agree with the idea of ​​saying the election was stolen and putting out this stuff which I call the bullshit” – former US Attorney General Bill Barr during his #January6thCommitteeHearings deposition. Photo by Jonathan Ernst pic.twitter.com/OiSH5B8KPA

And Ivanka Trump “accepted what [Barr] said and what he was saying,” she told the committee.

Holy shit they got Ivanka to denounce the Big Lie?!?!

Details like these breathed life into the narrative that we all know well by now—how Trump lobbied the Department of Justice and Pence to help him overturn the 2020 presidential election results, how he urged his supporters to descend on Washington, DC, that day ( “will be wild!”), and how slow he was to act when the rally turned into a dangerous riot.

Trump never directly told people to take over the Capitol or to commit acts of vandalism and violence. And yesterday’s hearing presented no smoking gun to this effect. But it did crystalize the case that Trump was “not just a rogue president but a would-be autocrat willing to shred the Constitution to hang onto power at all costs,” as Peter Baker at The New York Times put it.

The hearing also delved into some of the more personal damage done by rioters. We heard from Caroline Edwards, a Capitol Police officer who was knocked unconscious in fighting with folks who were trying to enter the Capitol. She described the scene as “an absolute war zone.”

“There were officers on the ground—they were bleeding, they were throwing up,” said Edwards. “I saw friends with blood all over their faces. I was slipping in people’s blood.”

She talked about watching fellow Capitol Police officer Brian Sicknick—who would die the next day—turn white after being sprayed with something by one of the rioters.

So far, we may not have learned any bombshell news, and it’s unclear that we ever will. And Trump supporters aren’t likely to change their interpretations of January 6. But”the efficacy of the hearing will ultimately not be determined by Resistance/Never Trump types finding it compelling or MAGA types calling it a nothingburger or worse,” suggest the Washington Examiner‘s Jim Antle.

As someone who was skeptical going in that this hearing had any value, I’ve changed my mind about that.

I still don’t think we’re on the verge of democracy dying, or that we need a new war on domestic extremism or anything like that. But what went down was frightening, and many of those involved in spreading the lies that led to the riot and to whitewashing it afterward (including but certainly not limited to Trump) are still major political players. Having a measured, multifaceted, and comprehensive record of what happened seems important for the historical record and for jogging contemporary memories about just how bad this actually was and how differently things could have gone if Trump had been surrounded by slightly less defiant people.

In all the hoopla, hackery, hot takes, and hyperbole that surrounded the Capitol riot (and the Trump era generally), all the Justice Department overreach against people who merely trespassed, all the discourse, it’s been easy to look at January 6 through slightly rose-colored glasses to dismiss grave pronunciations as just so much melodrama. Last night’s hearing—and hopefully those to come—serves as a powerful antidote to this.

The committee’s next public hearing will be June 13.

Republicans and Democrats offer radically different visions of what antitrust bill would do. In discussing Sen. Amy Klobuchar’s (D–Minn.) antitrust bill—known as the American Innovation and Choice Online Act (AICOA)—Republicans and Democrats have (once again) displayed totally diverting ideas about what changing antitrust law would mean for Big Tech. See this thread from TechFreedom legal fellow Andy Jung for more.

At a rally yesterday, Democrats like Klobuchar and Rep. David Cicilline (D–RI) “were quick to…wave away concerns that AICOA would be used to attack content moderation,” notes Jung.

9/ Republicans see an opening and are upfront about how they envision using the bill. They probably wouldn’t be supporting the bill, at least as vocally, if they didn’t think the bill’s language provided the foothold.

“There is nothing in this bill that would make it more difficult for platforms to have in place content moderation policies,” said Cicilline. “No one who has done an objective analysis…thinks that in any way platforms will not be able to do what they currently do to moderate content.”

Meanwhile, Republicans like Rep. Ken Buck and Sen. Ted Cruz have suggested that they support the bill precisely because it would change the way tech platforms must moderate content. For instance, during markup for the bill, Cruz said “It would provide protections to content providers, to businesses that are discriminated against because of the content of what they produce.”

No, capitalism is not to blame for the formula shortage:

I don’t understand how the formula crisis is about capitalism:

—The govt purchases half the product in a way that entrenches market power.

—The govt closed a major plant.

• “The US Justice Department is opening a sweeping civil rights investigation into the Louisiana State Police amid mounting evidence that the agency has a pattern of looking the other way in the face of beatings of mostly Black men,” reports the Associated Press.

• “Why aren’t we out of Yemen yet?” asks Bonnie Kristian.

• Title IX is now being used to go after eighth graders who won’t use a classmate’s preferred pronouns.

• Ben Dreyfuss explores why people are so mad about Tesla’s remote work policies. “The only way to justify such a huge reaction to such minor news is to invest a massive moral judgment in it,” writes Dreyfuss. “You have to make Elon Musk’s working from home policy really truly terrible.…I don’t know how you do that.”

Violent felons commit the vast majority of gun crimes and should be held accountable for their actions. Instead of releasing criminals onto the streets to commit more mandatory crime, our bill will establish minimum sentences for repeat offenders.https://t.co/Xuo61mz8Qj

• “The Defense Department has officially ended a 1980s-era policy that restricted HIV-positive service members from deploying overseas and being promoted into leadership and management positions,” notes NBC News.