The March 2022 Federal Reserve meeting represents a massive shift in the Fed’s approach to monetary policy and inflation.

For several months, Jay Powell has been flirting with hawkishness, but it’s been all talk. He’d say what everyone wants to hear but refuse to raise rates or taper the Fed’s balance sheet.

Market participants have become used to this talk and become numb to it, but Wednesday’s meeting shows that the Fed has actually changed their tune and shifted their focus towards a tightening of monetary conditions.

So, what happened at the Fed meeting? Here are some quick facts:

Despite a 0.25% hike in rates, it’s key to remember that CPI is still at 7.9% year-over-year, making the ‘real’ (inflation-adjusted) Effective Federal Funds Rate -7.56%. It still however represents a significant shift in attitudes and should the equity market come to accept this, the idea of ​​the “Fed put” might go by the wayside, however, we shouldn’t get too excited just yet. It’s just one rate hike and some projections.

We still live in an effectively zero-interest rate world.

Jay Powell said in the press conference Wednesday that he expects interest rates to be 2.8% by the end of 2023, which would make this the most rapid series of rate hikes since the mid-2000s before the Great Financial Crisis. Before this meeting, the Fed’s end-of-2023 expectations were 1.6%, a difference of 1.2%.

This dramatic of a shift in one meeting suggests that the Fed sees inflation pain getting even worse in wake of the war in Ukraine, as they were relatively unperturbed by inflation in prior meetings, even when CPI was printing in the sevens.

In 2020 and 2021, the system was flooded with money. Household net worths hit an all-time high and consumers were showered with stimulus. They largely bought durable goods and depleted the supply, which pushed the prices up, creating inflation. Tighter monetary policy means less money in the system and that the price of money is going up (interest rates).

As a non-expert Fed watcher, my favorite macro commentators are quick to dismiss equity market price reactions in the wake of a Fed meeting in favor of analyzing price action in the bond market, specifically credit spreads.

The gold standard here is the spread between the 2-year and 10-year US Treasury notes. When the shorter-term note (2-year) begins to approach or surpass the interest rate on the longer-term note, it indicates that the bond market believes rates will be relatively high in the short-term, only to decline a few years out.

This is known as the yield curve, and the yield curve inverting (the short-term rates becoming higher than long-term rates) is one of the most accurate economic indicators of a recession in twelve months.

The bond market is essentially saying that they don’t believe the Fed, that another exogenous event like COVID or the Ukraine war will occur, forcing the Fed to once again shift to a dovish tone and lower rates.

I mean, just two months ago, in mid-January, Jay Powell said “We have been and probably remain in an era of very low interest rates.” Just two months later, he completely changes his tune, forecasts six rate hikes this year, and implies that the Fed’s primary mandate will be getting inflation under control. The bond market’s skepticism makes total sense.

Despite holding that inflation is transitory and largely ignoring inflation concerns for several months, then reluctantly admitting their mistake, the Fed’s actions up until now display a blade attitude towards inflation.

Powell’s language changed at this meeting as he made several comments about inflation, like “we’ve had price stability for a long time and maybe come to have taken it for granted.” Now we see the pain. I’m old enough to remember what high inflation is like,” or “you cannot have maximum employment without price stability.

The Fed hiked their inflation projections to 4.3% for 2022 from 2.6% this meeting and simultaneously cut their GDP projections from 4.0% down to 2.8%, which is certain to satisfy the stagflationists who’ve been waving their hands for the last year or so .

The Federal Reserve massively expanded their balance sheet in the wake of the 2020 recession. There was significant pressure on treasury and mortgage securities, so they began supporting the market by buying them and holding them on their balance sheet. 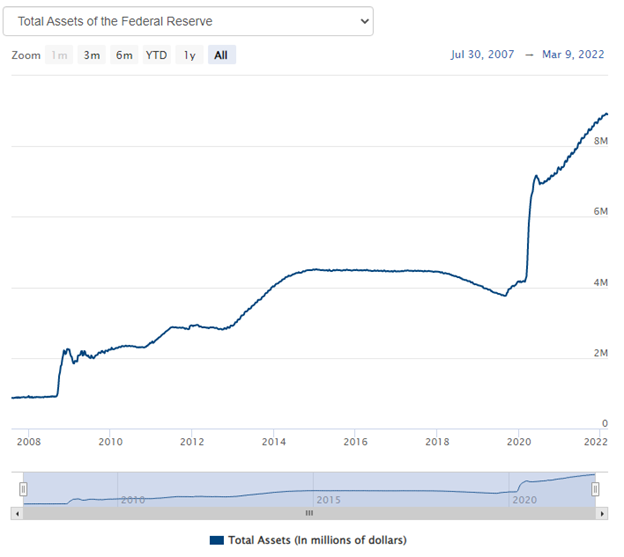 The Fed announced that they’ve begun planning to sell assets from their bloated balance sheet in coming months, with more details promised when the meeting minutes are released in a few weeks.

However, we should take this with a grain of salt, because the exact words are “the Committee expects to begin reducing its holdings of Treasury securities and agency debt and agency mortgage-backed securities at a coming meeting,” which is vague and they give themselves an out.

This is known as quantitative tightening. It’s the opposite of the ubiquitous quantitative easing, which is when the Fed buys assets and them on their balance sheet (see: money printer go brrr memes).

Powell indicated that this round of QT will be very aggressive, and “faster and much sooner” than previous QT campaigns.

The last time the Fed started selling assets was late 2017, and that lasted until 2019. The fastest rate that they sold was in the neighborhood of $50 billion per month (or 0.11% of the balance sheet per month), at a time when the Balance sheet was roughly $4.5 trillion, or roughly half the size that it is today (~$9T).

If we are to take Powell’s comments at face value, we should see a run-rate in excess of $100 billion per month, or 0.11% of the balance sheet per month, as ‘faster’ should mean that they sell a higher percentage of their balance sheet.

Ever since inflation started running hot, nearly every strategist was saying that the Fed is “behind the curve,” or not reacting to economic realities quickly enough and setting themselves up for failure later.

Said strategists’ primary concerns are that the Fed has been running such a loose monetary policy that they’ll be forced to start tightening as the economy is slowing, which is historically a bad strategy.

Lyn Alden, a strategist I really enjoy reading, wrote a pretty detailed report about this Fed meeting in her newsletter, but the main points come down to these:

In her eyes, this creates a type of ‘damned if you do, damned if you don’t’ lose-lose scenario with the Fed. Responding with looser policy creates more inflation and tightening conditions is recessionary.

The consensus is certainly that the Fed is behind the curve and has painted themselves into a corner and left themselves few options to deal with today’s monetary conditions. That’s certainly the point-of-view dominant in this article.

And while things could always be different this time, betting against the Fed has been a bad strategy thus far this cycle.

Of course, inflation is the variable never included in prior experiments, but there’s always been a new variable that strategists pointed to as the reason to bet against the Fed. Thus far, fading that sentiment has won. Will it this time around?