Energy, after several years of underperformance and overall decreased mainstream relevance in the financial markets, is making a big return.

And following the price action driven by the Russia/Ukraine conflict, the sentiment around it seems to have gotten more bullish.

And the ETF flows into the primary crude oil ETF (USO) confirming this:

The ETF inflows for something like crude oil probably captures the retail sentiment pretty well, as most sophisticated investors would opt to just trade futures. 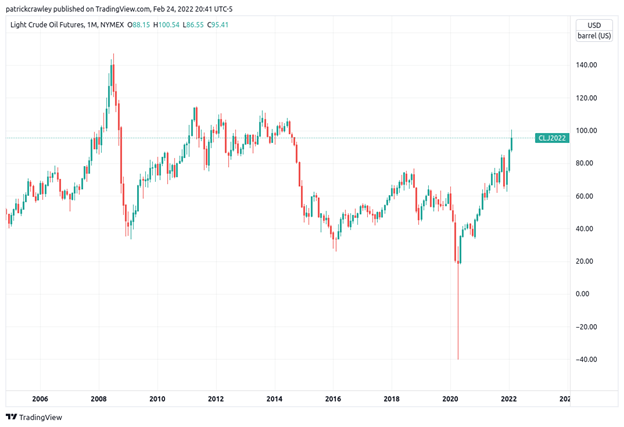 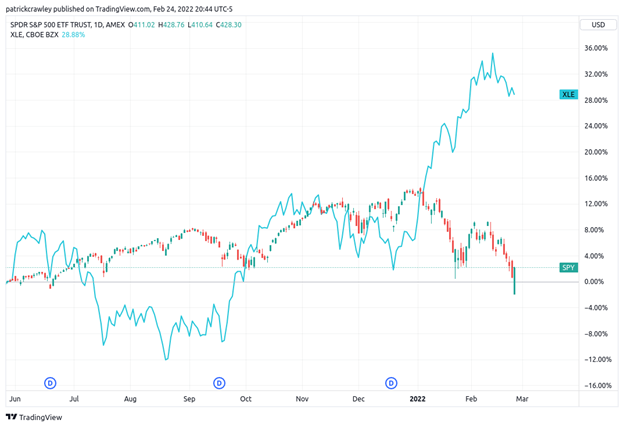 So, is energy back? It’s been years since hedge funds or institutional investors have cared about the industry after the shale boom died out. Energy equities have been boring laggards, often begging you to take a position at what seems like an inflection point, only to disappoint once again.

Well, crude oil is above $100 again, so that’s quite significant. And everyone on the news is talking about the price of oil constantly.

So we’re gonna go over some of the common bull cases for oil, even if we’re not believers in them, so you can understand the thesis behind what is becoming one of the most significant trends in markets right now.

The Rise of Post-COVID Inflation

As you might know, energy is a key component of inflation. The price of oil is an input cost for nearly everything in the economy in some, even indirect way. As such, producers raise prices with costs. In many cases, these effects are offset by other factors like wage growth. After all, the US economy hasn’t had significant inflation before today in decades, even amid some wild swings in the price of oil.

When COVID hit, the deflationists felt vindicated. After all, if you’re staying at home for months at a time, you’re consuming less. Driving less, eating out less, shopping less, working less. Then the price of oil went negative, even further confirming their thesis.

But an interesting thing happened. The Federal Reserve announced their intention to use “unlimited” monetary stimulus to support the US economy and markets, and both the Biden and Trump administrations have been generous with their use of fiscal stimulus.

This staved off some of the worst of the deflationary effects we would have experienced if policymakers allowed the economy to enter a deflationary reset of the economy.

As a result, many in the camp that believe the inflation we’re experiencing now is here to stay, use oil as a proxy for easily expressing that view. Historically, oil and natural gas have been pretty tightly correlated to changes in the inflation rate.

The Rise of ESG

ESG stands for “Environmental, Social, and Governance.” It represents a set of standards by which investors can evaluate if an investment is good for the environment, how well a company treats their employees, if they’re contributing to any social good, and if their corporate governance is investor-friendly, rather than setup to enrich insiders. Things of that nature. Investors can filter if the company’s modus operandi aligns with their personal values.

ESG is part of a growing trend, especially among Millenials, of investors caring about the impact of their investments. They don’t want to invest in companies that pollute the environment or mistreat their employees, and ESG criteria gives them a way to find investments that meet their values.

But ESG is more than just criteria for individual investors use. It’s becoming a way for institutions to nearly entirely write off investing in certain industries.

Over the last few years, ESG as an investment theme has exploded in popularity. Major asset management firms like BlackRock are offering tons of ESG products, and major fund managers like CalPERS (California Public Employees’ Retirement System) have redirected much of their funds into ESG-friendly investments.

Here’s a chart from Bloomberg showing the percentage of global assets under management invested in ESG-friendly products:

There are big winners and losers in this massive shift in capital flows.

The winners are undoubtedly alternative energy companies like those in solar and hydroelectric power, but there are losers, too. And chief among them are fossil fuels companies operating in “dirty” energy industries like oil and gas, which are seeing massive divestitures from institutional investors.

Institutions like the Harvard Endowment and Cornell Endowment have announced their intent to completely divest from fossil fuel investments, with several other large institutions like CalSTRS and CalPERS exploring divestment.

In the cases where institutions remain invested in oil and gas companies, they may use their board seats and large ownership stakes to direct companies towards investing in renewable energy sources and away from new oil and gas projects.

Back in June 2021, in one of the most popular stories about ESG’s triumph, a relatively small activist hedge fund called Engine No. 1 was able to secure two seats on the board of energy giant Exxon Mobil, all while owning only 0.02% of the company’s shares. Engine No. 1 was able to do this by persuading larger Exxon investors like CalSTRS (California State Teachers’ Retirement System) to side with them.

Engine No. 1 plans to use their board seats to push Exxon towards projects that address climate change.

The result here is that there’s a limited pool of global capital, and less and less of it is enthusiastic about investing in energy. This means less capital for oil and gas companies to explore new projects, resulting in reduced new supply.

Beyond ESG mandates at the institutional level, or the fact that investing in fossil fuels might be too toxic from a public relations perspective for certain funds, the energy industry itself is aiming to reduce their production of fossil fuels.

The International Energy Association announced their ‘Net Zero By 2050’ initiative in early 2021, and among several other concerns which should concern anyone who fills their tank with gasoline, “no new oil and gas fields approved for development” as a milestone to achieve by the end of 2021!

Obviously, these companies aren’t just choosing to go out of business.

Their plan is to start producing renewable energy sources like solar, batteries and wind. Beyond things like the fact that these energy sources have generally far lower capacity factors than fossil fuels, most people don’t have the infrastructure to even use these sources of energy yet, meaning they’ll still be producers of fossil fuels.

Which, if we are to take the IEA at their word that the industry is aiming to imminently halt development of new projects, then that would probably lead the price of fossil fuels to increase pretty significantly.

As a general trend, Republicans have loose energy policy and Democrats have tight energy policies.

Biden got off to a quick start after his inauguration in January 2021, killing the Keystone XL pipeline project with an executive order on his first day in office. He sent a message to the energy industry so they know where he stands, he prioritizes the environment over industry.

Unfavorable energy policy means fewer projects get completed, less oil is discovered in the ground, and finally less supply comes to market. With the US being the world’s largest oil producer, this has a pretty significant effect.

The supply chain is infinitely complex and hard to reduce down to a soundbite. However, legendary curmudgeon Nassim Taleb of Black Swan and Antifragile fame was able to explain the core concept of why the supply chain is disrupted post-reopening, in less than three minutes, all without boring you with details about trade routes and whatnot.

This convexity in the supply chain flowed through to the oil markets, where many people needed a lot of oil and all at once, at a time of limited short-term supply.

The Rise of China

Kevin Muir of the Macro Tourist flagged something interesting about China’s future energy consumption in an article from last year I was reading again recently.

As a country gets more wealthy and industrialized, their domestic consumption of energy goes through the roof. This makes sense, but you might think China is past this point and has already hit their peak consumption growth. But the reality is far different than you’d expect.

Below is a chart, from Muir’s article. Notice that while coal use rose parabolically in consumption, oil is still lagging. This is probably because while China is super industrialized, a huge portion of it is still undeveloped. 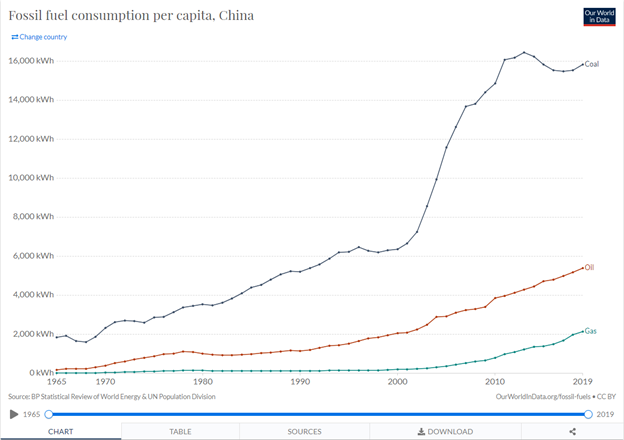 While we’re not the type to fade a runaway trend, we like to keep our ear to the ground and gauge the sentiment.

When everyday folks are getting excited about a trade, that’s typically the time where those who are early in the theme are closing their positions.

That could be happening now, but you could have said that at so many points throughout the sustained bull market in US equities and lost all of your money.